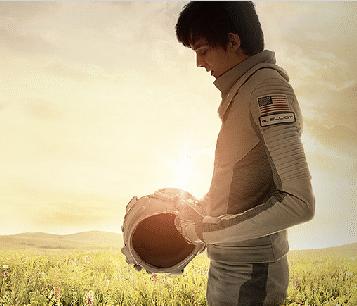 As another year comes knocking our door, Peter Chelsom who previously directed Hector and the Search for Happiness for Relativity brings yet another astounding love story, science-fiction adventure film to the big screen.

The Space Between Us is an original story which ultimately finds its vision from director and writer Peter Chelsom as well as producer Richard Lewis, in which both wondered what would happen if there was a baby born in Mars.

Asa Butterfield plays Martian Gardner in The Space Between Us, but not the kind with slimy green skin and giant jet-black eyes. He's a human, just one that happens to have been born on Mars.In this interplanetary adventure, a space shuttle embarks on the first mission to colonize Mars in which it shows that civilization is possible on this planet, only to discover after takeoff that one of the astronauts is pregnant. Shortly after landing, she dies from complications while giving birth to the first human born on the red planet and never revealing who the father is. Thus begins the extraordinary life of Gardner Elliot he is an inquisitive, highly intelligent boy who reaches the age of 16 having only met 15 people in his very unconventional upbringing.

While searching for clues about his father, and the home planet he's never known, Gardner begins an online friendship with a street smart girl in Colorado named Tulsa which is being played by Britt Robertson. When he finally gets a chance to go to Earth, he's eager to experience all of the wonders of the earth that he could only read about on Mars, from the simplest things to the extraordinary.Eager to find his father, Gardner escapes the team of scientists and joins with Tulsa on a race against time to unravel the mysteries of how he came to be, and where he belongs in the universe.

The movie is ultimately about Gardner's journey on becoming human. After being most of his life on Earth with limited contact to humans, Gardner can only learn to be one from the internet and the couple of adults that live with him in Mars. It's about the journey of finding out who you really are and where you belong.