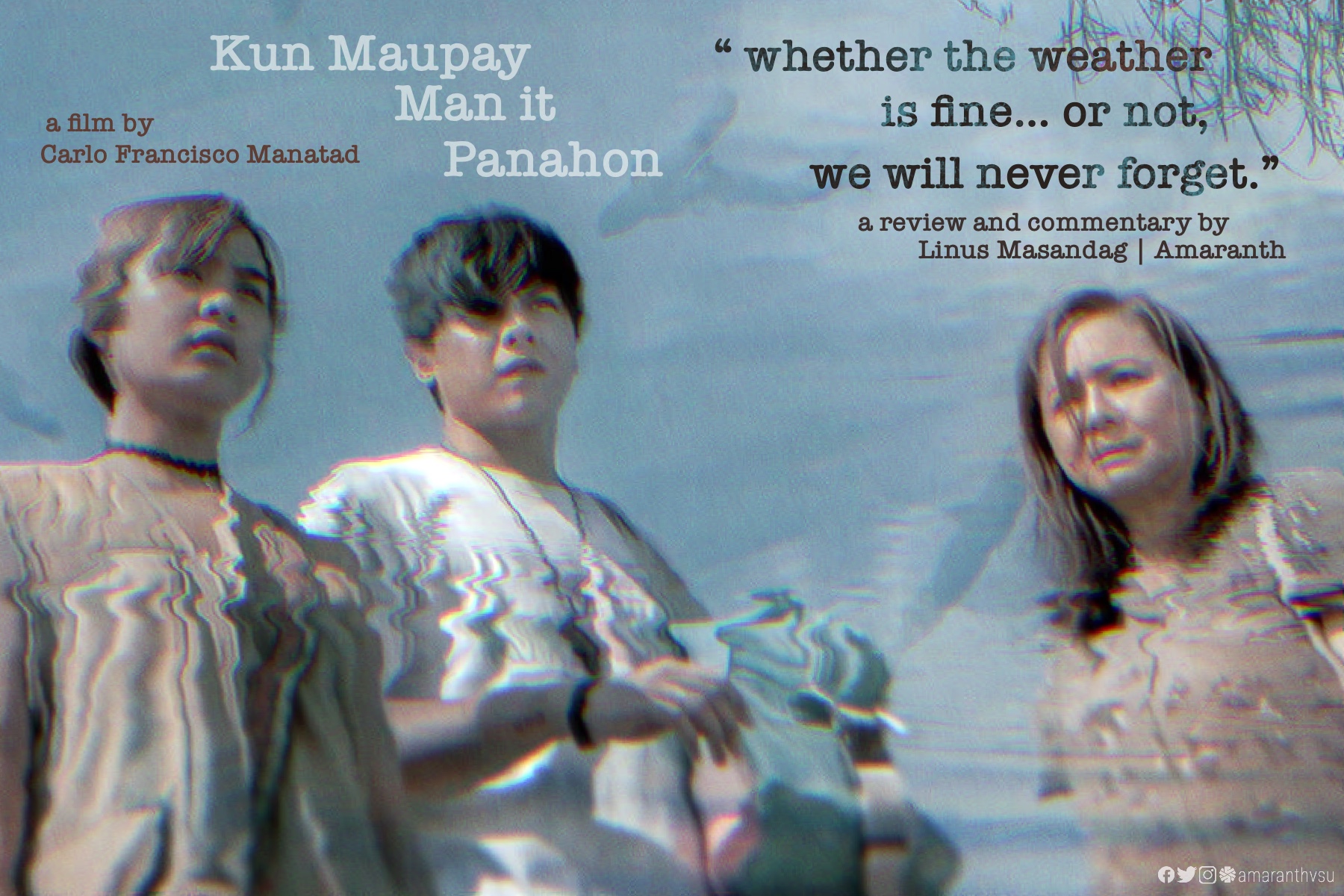 The scorching sun loomed over a vast wasteland that was once a huddle of houses; there was a pile of cold and lifeless bodies beneath the disarray of storm debris; a sea of survivors were crammed together inside the evacuation center like sardines in a can; the agonizingly slow pace of relief efforts and a community in utter distraught—all these after the onslaught of Typhoon Yolanda, one of the strongest and deadliest tropical cyclones ever recorded, which struck the islands of Samar and Leyte almost nine (9) years ago. It was undeniably traumatic, one that left a sprawling scar in its wake. However, as “resilience” being innately Filipino (or so they said), the victims were mostly left to carry on. But did they really?

Carlo Francisco Manatad’s ‘Kun Maupay Man It Panahon’—which translates to ‘Whether the Weather is Fine’ in English—depicts the hardships of the Taclobanon people during the aftermath of the said typhoon. An international (i.e. Cinema e Gioventù Prize – 74th Locarno Film Festival) and local (i.e. 2nd Best Picture – 47th Metro Manila Film Festival) awards favorite, the film follows three characters: Miguel (Daniel Padilla), his girlfriend Andrea (Rans Rifol), and his mother Norma (Charo Santos) as they navigate the storm-crushed ruins of post-Yolanda Tacloban. The trio hopes to navigate beyond their traumatic past; through a distressing present; and towards a better future.

One should not expect a conventionally normal narrative—because this doesn’t have one. In fact, this film is a bleak, often humorous, and visually stunning mood piece through and through that uses the beauty of magical realism, surrealism, absurdism, and satire to convey the collective post-typhoon trauma. It’s chocked full of symbolism and hidden meanings bubbling underneath the surface. Manatad, a Taclobanon himself, employed this kind of storytelling because he wanted to explore those complex feelings we all felt during that time—the desperation and determination to survive despite the huge loss and suffocating hopelessness brought upon by the typhoon. The film’s whimsical mise-en-scène and fantastical elements, contrasted by the setting’s grim and devastating state, made the film’s absurdity worked wonders. Plus, the use of the Waraynon language was a breath of fresh air and a much-needed representation in our local cinema.

Filipino resiliency is the film’s most common theme—a concept that has always been misunderstood, overused, and abused by many. We live in a country that constantly experiences numerous disasters every year and resilience was often the presenting solution. We are always told to just accept the fact that disasters do happen all the time, and there’s nothing we can do about it but to trust that there will be a silver lining at the end. However, what this film tries to do is deconstruct this kind of mentality and show that we all cope differently in the face of tragedy. It offers no hint of romanticism or glorification; instead, it critiques that kind of concept and silently asks for accountability. It’s a cry for help and a reminder that chaos will happen again if we don’t raise our voices and let ourselves be heard.

Almost nine years had passed since the tragedy, and time had already obscured the post-typhoon grief of some of its survivors; while some are still healing from the bruises caused by the typhoon. Will the grief end or will it continue for years to come?

While the film uses Typhoon Yolanda as its backdrop, its message and themes are still more relevant today, especially in the context of our current national socio-political landscape—the mishandling of the COVID-19 pandemic and the lack of disaster preparedness from multiple calamities that passed by recently. We are always told to pick up the pieces after a tragedy and stay strong, but Filipinos aren’t always like that. Yes, we are tough, but our strength only goes so far before we aren’t. We bleed and cry, but we don’t have to convince ourselves in any tragedy that all will be alright in time.

Whether the weather is fine...or not, we will never forget.