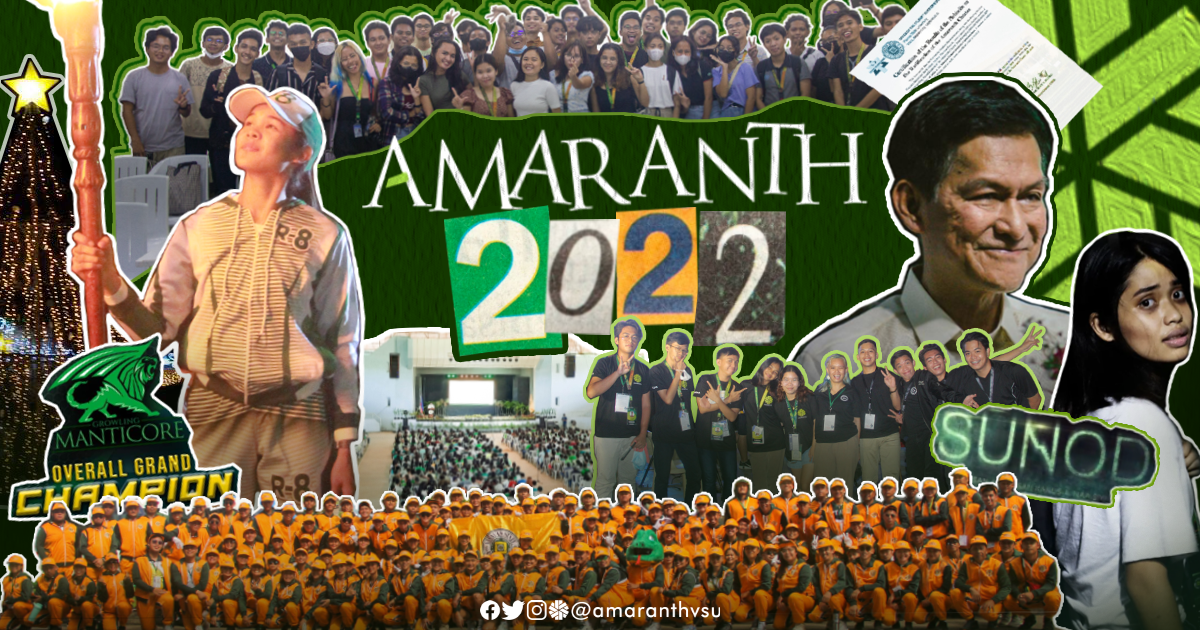 The year 2022 has proven to be one of the most challenging years for the world but also for our very own Visayas State University. It saw the height of the COVID-19 pandemic, the historic national elections, the natural disasters, and the gradual return to in-person classes. Ours is a story of endurance borne out of the Viscan pursuit for relevance, integrity, truth, and excellence.

We at the Amaranth witnessed most of the transformative events of the university this year. Here are the highlights of the Amaranth coverages for 2022.

Being one of the first universities in the country to gradually implement in-person classes since March of this year, VSU kicked off the resumption of classes with a two-day Student Onboarding program held last September 12 and 13, at the VSU Gymnasium. Students of the green and yellow motif grew in anticipation as the gates to the university were once again opened to the Viscan community after two years of distance learning. The venue was jam-packed with students blazed in excitement with an appetite for learning and an eager will to explore the vast, nature-centric, and scenic setting of the university.

The student onboarding program featured creative presentations, interactive forums, and enlightening talks about relevant subjects such as the passage of the Bawal Bastos Act and the groundwork for the Universal Access to Quality Tertiary Education Act. It also introduced students to the university policies, oriented them towards the Updated Health and Safety Protocol, and stimulated future plans of the university, among others. Needless to say, the program served as an introductory phase for the students as they started their journey in VSU.

During the orientation week, Amaranth produced several photo and video productions, cartoons, and articles that represent the lives of Viscans during their early stay at the university.

After a two-year break, VSU launched its annual Intramural Meet last October carrying the theme Sálingkusóg. The theme is a portmanteau of the words Sálin, which means to transfer, and Kusóg, which means strength. The event was spearheaded by the Institute of Human Kinetics (IHK) highlighting “the transference and cultivation of strength, discipline, camaraderie, and sportsmanship across all competitions in the next normal”. As the crowd bawled in their excitement at the comeback of the Intramural Meet, University President Dr. Edgardo E. Tulin welcomed the students during the opening ceremony along with the Guest of Honor Prof. Henry C. Daut, Deputy National of the Philippine Sports Commission (PSC)-Philippine Sports Institute (PSI) who also imparted words of motivation.

This year’s Intramural fostered the enthusiasm and competitiveness of the students as it featured seven factions: Soaring Phoenix, Mystical Sphinx, Growling Manticore, and Gallant Griffins for the college; and Vehement Gryphons, Valorous Wyverns, and Vigorous Basilisks for high school. Each team grappled to win the trophy of the championship in sports events, literary and musical, and the Ginoong Malakas and Binibining Maganda. The defending champion, Growling Manticore – a faction composed of the College of Agriculture and Food Sciences (CAFS) and College of Nursing (CoN) students held on to their title hailing as the back-to-back champion. Meanwhile, Vehement Gryphons triumphed at the event for the high school level.

The Intramural Meet 2022 served as the inception of the university to gain back the alacrity it had years before the pandemic. This cultivated the strength and sportsmanship of both the students and staff in the new normal. Besides, the event gave them the chance to unload stressful weights through sports and reload inspiration.

Amaranth had extensive coverage of the Intramurals Week covering every game from each faction, posting real-time scores and events, producing photos and video production each day, and the release of multiple Intramurals-related articles.

The University Student Election Board (USEB) verified the ratification of the Amaranth Charter through an official certification posted Friday, November 25, after tallying the results of the plebiscite held on November 23.

With an overwhelming majority of 3,840 “yes” votes out of the 4,536 casted, the election board concluded that more than two-thirds of the studentry involved in the plebiscite, held during the General Student Assembly, consented to the validation of the Charter, which is enough for its ratification to push through.

The ratification establishes Amaranth to be a media organization that is autonomous from the university administration and supreme student council, upholds press freedom, and commits to a responsible campus press to preserve the students’ rights to be well-informed and socially aware in accordance with the mandate stipulated in R.A. 7079 or the Campus Journalism Act of 1991.

The Amaranth Editorial Board and staff see this as an affirmation of the Viscan community to its core value of defending the truth and standing by it.

ACADEMIC CONVOCATION— The State of the University Address

In his State of the University Address titled "Padayon sa Paglambo, VSU" last November 21, VSU President Dr. Edgardo E. Tulin laid out the achievements of the university for the academic years from 2020 to 2023 and presented the plans his administration has for the future.

President Tulin lauds VSU in its continued pursuit for excellence and highlighted VSU’s reputation as “one of the emerging universities in the Philippines and in Southeast Asia” by securing international partnerships and recognitions like being the first Level IV AACCUP accredited institution in Visayas and Mindanao; a 3-star QS rating by CHED Central Office; the inclusion in the Times Higher Education Impact Rankings; and ranking 8th in the country for Webometrics Ranking of World Universities among other accolades.

The university has also seen a transformative human development program as part of the university’s goal of building a global university brand by forming linkages and partnerships with academic and research institutions in the country and around the globe.

The Amaranth released highlights and summary of Dr. Tulin’s State of the University Address available at https://amaranth.vsu.edu.ph/news.

On November 28, the university inaugurated its 15-million-peso centennial gates and fencing project that will serve as the “newest icon” for the institution as it awaits its 100th founding anniversary in 2024.

“As we turn 100 years in less than two years, we see this edifice as the newest icon that will shape the future narrative of our beloved Visayas State University,” Dr. Tulin said in his welcome speech during the inauguration.

As an annual tradition and part of the celebration of the yuletide season, the university celebrated #PaskoSaVSU with the Christmas Lighting and Viscantahan along with the centennial gates inauguration on November 28. It saw the display of Christmas ornamentations and fireworks display in the lower and upper gates and along the VSU mall promenade.

Working with three staff, one working camera, and smartphones, we at the student publication are committed to our mandate of keeping the Viscan community informed and included in the conversations and events.

SUNOD, Amaranth's long-awaited original short film, was released on November 30th. It is about a weary college student who finds herself being terrorized by an unknown figure. The story is inspired by the storyteller, who goes by the name "Jane Doe." It is directed by Linus Masandag, an Amaranth and SINEGANG.ph writer, student, and film critic.

The whole production team worked hard for the success of the film. The sleepless nights, balancing school work and shooting technical issues, and lack of equipment was all worth it. Fortunately, we were able to astound the VSU community.

True to the spirit of fearless and responsible journalism while delivering every student’s right to information, Amaranth had a special coverage of the comeback of the biggest regional sporting event after a three-year pandemic hiatus in Southern Leyte State University (SLSU). The Amaranth team joined the VSU Pythons delegates during the four-day regional State Colleges and Universities Athletic Association (SCUAA) as they bagged the second overall championship.

The Amaranth team, composed of five staffers, has conquered long distances, sleepless nights, and a poor internet connection to give real-time updates of the games, players, and scores for every sporting event to the Viscan community. Some of the highlight coverages of Amaranth during the SCUAA Meet 2022 include the real-time posting of scores, day-to-day in-photos, articles, and same-day edit videos. Check https://amaranth.vsu.edu.ph/ for SCUAA-related stories.

Despite the internal exhaustion, seeing the smiles, victories, and triumphs of VSU athletes makes the staffers fulfilled and driven to continue what Amaranth has promised to the Viscan community – delivering the truth and standing by it.

The academic year so far

At the heart of every institution is the desire to serve. We at the student media organization, in full commitment to the Viscan core values: “Relevance, Integrity, Truth, and Excellence”, strive to bring our stakeholders their right to be informed and socially aware.

Our fearless and uncompromised reporting this year will be boosted as we continually recognize the vast room for improvement and the immediate need of Viscans for genuine truth-tellers within the university walls.

In the service of Truth, we are Amaranth, the official student media organization of the Visayas State University.