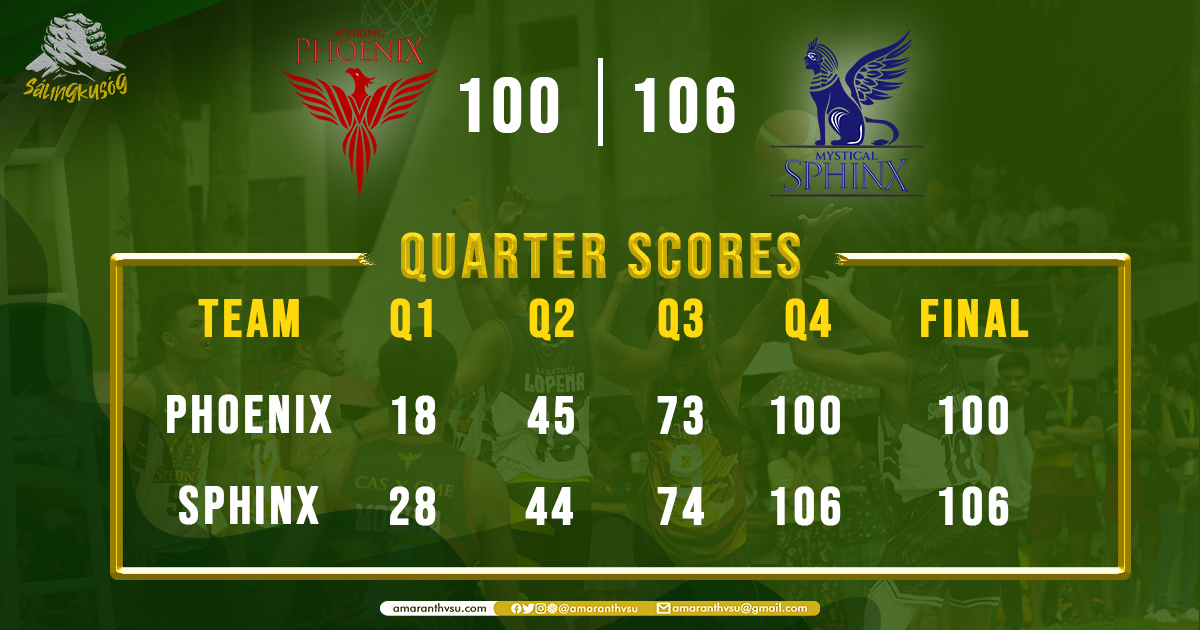 The Mystical Sphinx wins the championship round of men's Basketball against the Soaring Phoenix in a high-intensity do-or-die (106-100) victory held at the VSU Upper Oval Basketball Court.

The Soaring Phoenix opens the game by winning the tip-off as they score the first 2 points of the game. Sphinx's Rebuyas #5 steals the ball and scores on a fast-break to equalize the surge. Sphinx's Abad #24 also scored on a fast-break after a steal to gain a (5-4) lead. Phoenix's Santos #6 and Belt Managbanag #11 scored back-to-back baskets to take a 5-9 advantage. Sphinx's Abad #24 scored back-to-back baskets to retake the lead, (12-11). The Mystical Sphinx went on to have a 16-2 run to extend the lead, (23-11) behind #24 Rolando Abad's back-to-back 3-point baskets and stellar defensive plays by #14 Abarquez. The Mystical Sphinx ended the 1st quarter with a (28-18) advantage.

Sphinx's Jayag #7 opened the 2nd quarter with a floater while Phoenix's Todavia #9 countered with a 3-pointer, (31-25). Both teams are showing equal intensity on defense in this quarter as both teams were trading baskets. Sphinx's Membrebe #2 hit a corner 3-point shot to extend the Sphinx lead (36-29). Phoenix's Olvis #15 answered with a corner 3-point shot of his own. The Soaring Phoenix showed an extreme intensity on the paint behind Managbanag #11 as they narrowed down the Sphinx lead, (38-36). Sphinx's Rebuyas #5 scored back-to-back fastbreak points to extend the lead to a (44-36) advantage. Phoenix's Managbanag #11 intercepted a Sphinx pass and scored back-to-back baskets in the paint to regain the lead with a (44-45) score in Soaring Phoenix's advantage. Sphinx's Abarquez #14 is at an early foul-trouble status with four personal fouls.

Phoenix's Bandibas #12 and Sphinx's Abad #24 traded baskets to start the 3rd quarter (50-49). Both teams traded baskets left and right in the early minutes of the 3rd quarter. Sphinx's Abad #24 scored an and-one in transition to stretch the Sphinx lead (58-52). The Soaring Phoenix went on to have a mini-run to take a 1-point lead, (60-61). Behind Mystical Sphinx's collective effort on defense, they tied the game at (64-64). Sphinx's Abad #24 and Rebuyas #5 led the Sphinx onslaught as they managed to get ahead at a (72-68) advantage. The Soaring Phoenix took the lead momentarily but the Mystical Sphinx hit the last shot at the end of the 3rd quarter to reclaim the advantage, (74-73).

The dynamic-duo of Rolando Abad #24 and Marvin Rebuyas #5 combined for 56 points.

(I'm [Abad] thankful that I achieved this. I wouldn't have accomplished this MVP award without my teammates and coaches who supported me. Mystical Sphinx, thank you so much.)

(I'm [Abarquez] thankful to our Lord God. We won because of teamwork; we dont blame, we only focus on the game.)

Belt Managbanag #11 tallied 26 points in an attempt to carry the Soaring Phoenix.

The playing coach of the Soaring Phoenix, Hermogines Centes II, stated that it was a good fight against the Sphinx. Centes was grateful to his team because they were able to enjoy the game, and win the second place.