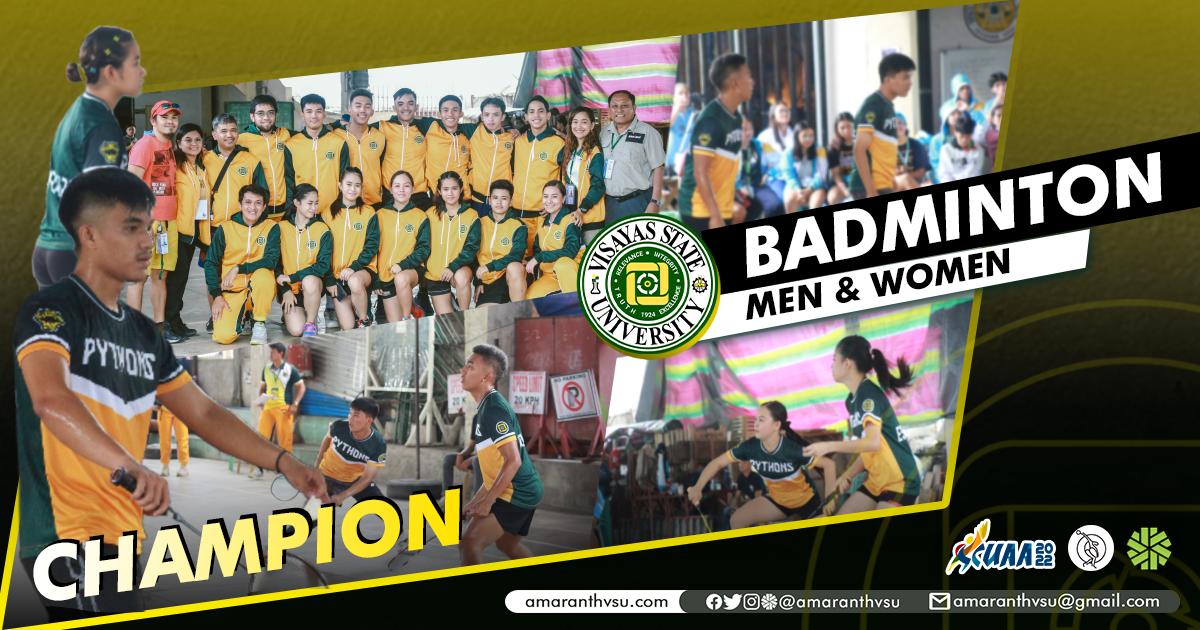 The VSU Men’s and Women’s badminton team remained on top during the whole regional 2022 State Colleges and Universities Athletic Association (SCUAA) Meet after both divisions won Gold in the championship round at Brgy. Rizal, Sogod, Southern Leyte yesterday December 2, 2022. The Women’s team faced off against LNU Golden Falcons , while the VSU Pythons Men’s Badminton team faced off against SSU Mountain Deer.

In the finals game of the Women’s division, the Singles-A match was played by Elaine Faye Esperanza. At the start of the game, Esperanza and her opponent were locked in a stalemate rally as both of them were tied at 5-a piece early in the 1st set. But little did her opponent know, this is where Elaine Esperanza broke loose. She ballooned the lead to a 5-point advantage and then ultimately won the first set in a 21-14 victory.

The dominance of Elaine Esperanza was still on full display in the 2nd set. Following the same pattern in the first set, things started off slow for Elaine Esperanza then obliterated her opponent away in a commanding 21-15 victory. Elaine swept her opponent in a 2-0 set victory giving the Pythons a 1-0 win-loss lead over LNU.

The siblings of Elaine and Ella Esperanza iterated the worth of their training.

“The training was worth it because we won, even from the intramurals to this year's SCUAA, we still managed to reach our goal,” Elaine Esperanza said.
Libutan acknowledges the sacrifice they’ve made for this victory.

“First of all, I thank God for this opportunity. After the game, the feeling was great knowing that everytime we train until late at night, and then go home to study, everything that we’ve sacrificed was really worth it” said Libutan.

Moreover, in the Singles-A match of the Men’s division, it was played by Carl Vianney Castil in which he swept his opponent in the Championship round.

In the first set, numerous extended rallies were displayed as Castil went hand-in-hand with his opponent. The game was close until Castil reached the 10th-point mark in the first set. Castil delivered a series of powerful smashes toward his opponent which is almost impossible to react to. This became his primary weapon in smashing the first set in a 21-15 victory. The second set was no different. The stellar performance he showed in the 1st set instigated the momentum to be at his side and never left. Castil continued to outplay his opponent play-after-play concluding the first game of the series to a 1-0 advantage after a 21-16 2nd-set victory.

In the Doubles match, the duo of Joshua Cuaresma and Ray Vincent Falle tried to continue and ride the momentum which Castil started. However, things did not go in their favor as they were swept in 2 sets out of 3. The sets were extremely close, bringing a lip-biting tension as the game went intense with both teams going toe-to-toe against each other. The 1st set and 2nd set went 19-21, and 22-24 respectively. This ties the series to 1-1, instigating a deciding singles match.

Martin Michael Angelo Valenzona in the deciding singles match went off against SSU. Knowing what’s at stake, a loss would end their title hopes.

In the 1st set of the deciding single’s match, Valenzona convincingly won against SSU tallying a 21-16 victory. Incredible saves, timely dives, powerful smashes, and overall flawless execution of skills proved to be too much for the SSU Mountain Deer to handle. He obliterated his opponent in the second set as he never let him score double digits, 21-9. He swept the sets in his series 2-0 giving the Pythons a 2-1 series advantage over SSU, claiming the top spot.

Valenzona gives his thanks to all that supported them.

“I’m thankful for this championship, we deserved this since we sacrificed a lot and our preparation was intense. I give my thanks to everyone who supported us, to coach Luke, our trainers, parents, and our supportive friends.”