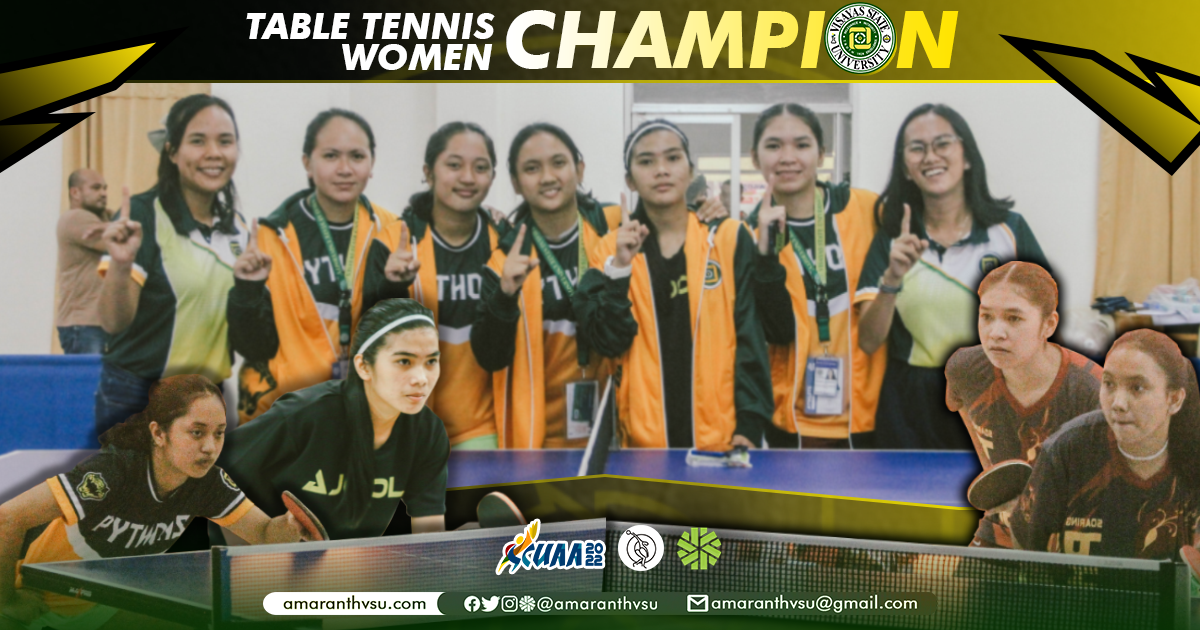 The VSU Pythons Women’s Table Tennis team were hailed as champions after a grueling finals match against NwSSU Lions in a narrow 2-1 team victory.

The championship game was held at the Plenary Hall of Southern Leyte State University (SLSU) on friday December 2, 2022, in the 2022 regional State Colleges and Universities Athletic Association (SCUAA) meet. The Singles-A match was played by Lara Jetcah Tulin, the Doubles match was played by the duo of Adorlyd Managbanag, and Jess Rica Caintic. The finals game ended with a Deciding Singles match which was played by Niña Joy Pacabis.

In the Singles-A match, Lara Jetcah Tulin pulled off a narrow 1st set victory where she logged a 14-12 advantage after a long rally against her opponent. This momentum carried on to the 2nd set after outlasting her opponent by 2-points tallying 11-9 victory. With a 2-0 set advantage, she managed to pull off another narrow victory in the 3rd set with a 12-10 win. With things looking well after a commanding 3-0 set lead in a 7-set match, that is when her opponent turned things around. During the 4th set, her opponent bested her in a narrow 10-12 score, but Tulin is still in the upper hand as she still has a 3-1 lead and needs only 1 more set win to give the Pythons a 1-0 advantage over the Lions. However, things still did not go as planned in the 5th set as her opponent logged a convincing 11-5 advantage over Tulin. The 6th set came in close as both went toe-to-toe against each other, but it was the Lions who prevailed in the rally, 9-11. The 7th set entered with great tension as Tulin and her opponent found themselves tied at 3-3 with Tulin winning the first 3 sets, and her opponent winning the 4th, 5th, and the 6th set. However, it was her opponent who bested her again in this set as Tulin lost 10-12 in a 7-set match.

After the Singles-A loss, the Pythons’ duo was not only poised to avenge Tulin but were also trying to keep their championship hopes alive since losing this 7-set match would mean second place. The dynamic pairing of Jess Rica Caintic and Adorlyd Managbanag dominated the first set after tallying 11-7 advantage over their opponent. The same thing happened in the 2nd set as they still logged an 11-7 advantage. The 3rd set told the same story as they now have a 3-0 set advantage in an 11-9 win. The 4th set began and VSU’s duo lost in a 7-11 defeat wherein this time, it was their opponent who dominated the set. The 5th set is where things are starting to worry the Pythons team as the opponent managed to snatch a 5th set victory after tallying a 5-11 score over Managbanag and Caintic. This was a déjà vu of the singles-A match as after leading 3 sets to none over NwSSU, the Lions snatched 2 sets away from them as the game was now at 3-2 but still in VSU Pythons’ favor. With pressure streaming into their faces, Managbanag and Caintic delivered a dominating performance after destroying the Lions’ duo in a dominating 11-6 score, winning the 7-set match in 6.

With both teams at a 1-1 win-loss standing, the deciding singles match will be played. This time, it was played by Niña Joy Pacabis, arguably their best player. Knowing the magnitude of the game and what’s at stake, Pacabis established utter dominance over anybody else on the venue by sweeping the Lions in a 7-set match by a wide margin. She logged an 11-4 victory in the first set followed by an 11-6 advantage in the second, the winning trend would go on in the 3rd and 4th set by tallying 11-2, and 11-7 wins respectively in a convincing fashion.

Pacabis’ win propelled the team to a 2-1 series advantage and ultimately claimed the title.

In an interview with Amaranth, Pacabis was happy to pull off the comeback victory.

Tulin also iterated being happy after winning the championship.

“I was happy because we managed to recover in the game after the first single defeat and it was also fulfilling because we worked as a team, and we know what our ultimate goal is. It was also fun.” Said Tulin.

Dr. Christy Desades, coach of the Pythons Women’s Table Tennis team was fulfilled after the victory.

“As their coach, the feeling is really fulfilling because our practices were really worth it and this is an answered prayer also for the team because we prayed for this and claimed that we believe that we will really win the gold medal”.