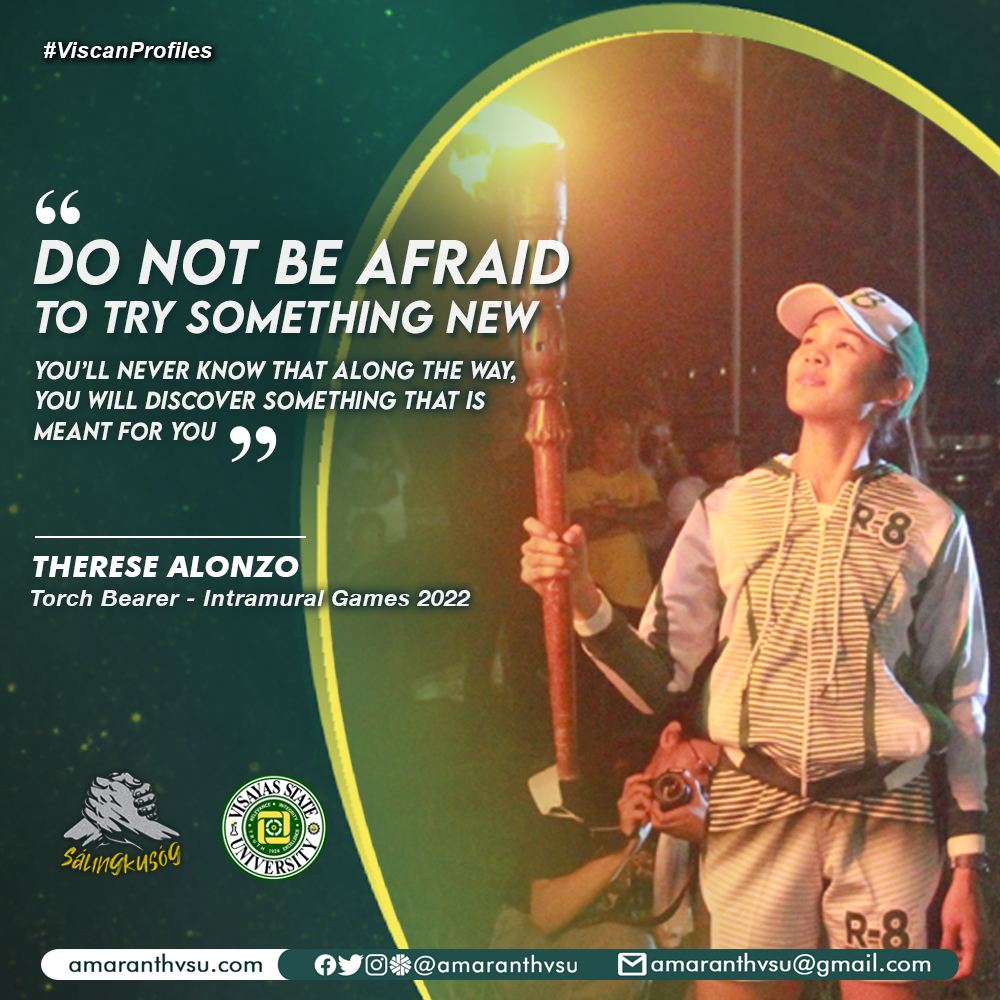 After two years of pandemic-induced isolation and virtually held events, Visayas State University (VSU) officially held its commencement exercises for this year’s university-wide intramurals. True to tradition, like most sports events, the affair will unfold with the lighting of the torch, with the flames burning hot and bright, symbolizing “the light of spirit, knowledge, and life”.

Prestige is always given to the one who carries the torch. This year, Therese Antoinette Alonzo, an exemplary athlete, and a fourth-year nursing student has been chosen to enkindle the flames of peace and harmony. With it, she carries pride gained through hard work and the hopes of many others who are seeking their bailiwick.

Swimming, like most sports, is typically dominated by men to cater to their physique and leisure. For a woman to be chosen to light the torch of the first VSU Intramurals after the pandemic, Therese feels honored that her efforts as an athlete are being acknowledged despite her last competition being almost three years ago. More importantly, for giving her a platform to drive equality and defy gender stereotypes by representing women’s ability in sports as she raises the torch to signify the beginning of the highly anticipated university-wide event.

Most gifted athletes often discover their passion for their sport at a very young age. However, for the Ormocanon athlete, it’s quite the opposite. During her childhood years, swimming was just a pastime hobby for her. Her memories of it only include family gatherings and vacations at the beach. She didn’t realize her love for it back then, but she loves the feeling of being underwater. It never really occurred to her that she could transform this merely recreational activity into a competitive sport.

When she was in 10th grade, she initially joined a lifeguard training program not until a coach saw her potential and encouraged her to join the swimming competition for their school intramurals, which she did. Unexpectedly, after three months of participating in competitive sports, she qualified for the EVRAA/regionals. She continued pursuing her passion for swimming until she was able to participate in the Palarong Pambansa.

Succeeding at your own pace

She considers herself a late-bloomer in swimming competing only at the age of 17. As she joined the swimming team, the training facilities in her school developed, creating a more conducive environment for training which enabled her to grow as much as she did, as a swimmer. Although her journey as an athlete started at a later stage, it allowed her to reach greater heights of success.

Therese treasures the sportsmanship that she has nurtured through competitions and friendships she made along the way. For her, sportsmanship is recognizing each other’s efforts amidst winning and learning to feel triumph for going through vigorous training, despite losses. Therese never imagined herself competing as an athlete, much less winning multiple gold medals, breaking records, and qualifying for higher competitions.

Therese’s passion for swimming further developed when she enrolled at VSU. When an opportunity came to participate in the swimming competition during the university-wide intramurals that year, she immediately seized it without thinking twice. At the time, she was just a freshman with a dream of assisting her family with their future medical needs, but her determination in competing is too great to resist. She reminded herself that if she simply focused on her studies alone, she would not advance as an athlete. God gave her this talent, so why not make the most of it?

Her monumental road to greatness continued with her victory in the women's swimming division and was awarded the MVP of the 2019 VSU Intramurals. She became eligible to participate in the 2019 SCUAA afterward and participated in four individual events and three relays, totaling seven events at the time. She competed in the individual event using various meters and strokes and was able to beat the records of other athletes and won the gold medal in each event, while she won two (2) golds and one (1) silver in the relays.

"Winning and receiving gold medals gave me a sense of fulfillment since all my training and hard work have finally paid off. I'm incredibly grateful to those who supported me because my success is also theirs."

Regrettably, her dream of competing at the national level was shattered upon the outbreak of the COVID-19 pandemic. Nonetheless, Therese always sees the brighter side of things and does not pressure herself, especially since she occasionally feels that her responsibilities as a student and an athlete are too heavy and overwhelming, leaving her exhausted both mentally and physically.

As a “late bloomer” in swimming, Therese discovered her love for the sport through the encouragement of her mentors. She was able to thrive because she underwent rigorous training and had a commendable mindset. Her message to people who are still figuring out what they are good at is to avoid putting pressure on themselves to keep up with everyone else's pace and instead appreciate and trust one's journey. In line with that, she remarked, "Don't be afraid to try something new... You never know what you'll discover along the way that is meant for you."