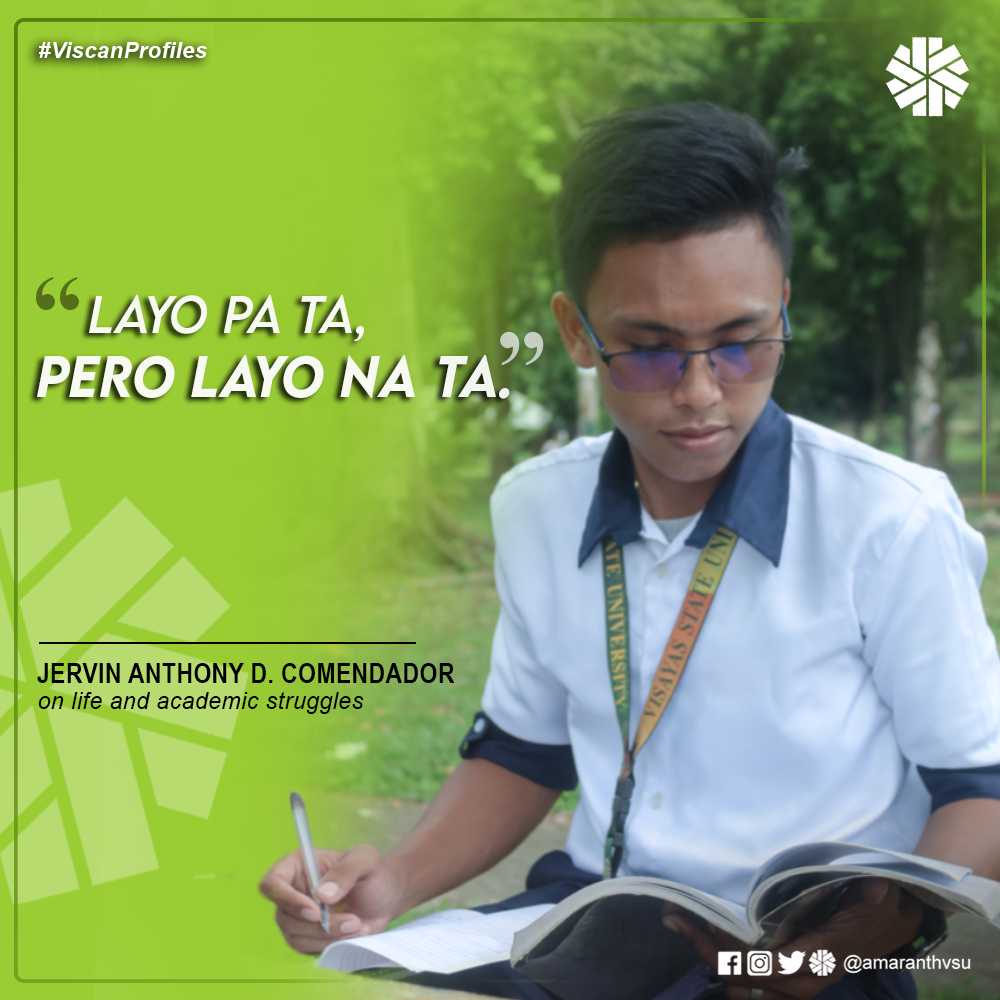 On a Saturday evening, the world stopped to read the cry of hope, love, grit, and perseverance that Jervin Anthony Comendador wrote as he shared pieces of his life, and struggles on Facebook, with the quote above opening his life letter. Without ever expecting the multitude of attention it has garnered, Jervin become a cornucopia of strength, and inspiration for the many who read it.

Growing up as a middle child in a family of five in Albuera, Leyte, Jervin knows their financial difficulties despite having both employed parents. His early awakening sparked a sense of responsibility to free them from poverty– it guides him to navigate through the alleys of life, barefooted, scratched on some areas, but perseverant nonetheless.

He went home and found his family in the same circumstance as when he left them, prompting him to delay his college applications. Despite this, he continued to search for potential scholarships that can hopefully cover the essential expenses for college. Eventually, he bagged partial assistance at a university to study engineering, but a conversation with his mother held him back. He wholeheartedly decided to postpone college.

Then a promising chapter in his life unfolded when he took the VSU-CAT with only a day of preparation, a sack of hope, and overflowing prayers. Needless to say, he passed.

As a physical education (BPEd) student, his early days at the university were not a walk in the park. Oftentimes, he would swallow his shame and ask for help from his peers to meet his needs such as transportation.

Met by the financial worries of his parents, Jervin tried to bottle up his struggles to himself. Until he took the courage to tell his parents of the university requirements (i.e. school uniforms) that needs monetary exchange. He remembered how he thought of discontinuing his studies as he recalled how his mother looked at him– eager to provide but can’t fully. Yet, just as he always does, Jervin struggled through it. This time, He had his friends with him who helped and shared what they can offer.

Jervin’s life is like a coin tossed over and over– it's one way or the other. As he was getting by with his studies, the pandemic came. Along with the paralysis of the world, Jervin and his family felt it too. Much like everybody else, he too found it hard doing online classes. With no personal gadgets to utilize, he resorted to borrowing his friend’s phone to attend his online meetings and check the e-learning platform for updates on submissions. He was already working as a part-timer along with his father as a construction worker to buy himself a smartphone. However, despite his perseverance, his strategy proved inadequate given his lack of resources. He was not able to meet the requirements for all his courses.

With the start of the face-to-face classes, he is grateful for the opportunity to learn in a more conducive environment, yet, it still proved to be a challenge for him. His heavy academic load and the constant worry about how to pay his fees without exhausting his family’s resources greatly bothered him. To ease his heavy feeling by an ounce he would often turn to write. Jervin loves to write- about his life and arbitrary thoughts. His medium is usually any sheet of paper, something disposable for his passing musings. He also writes on the messaging app on his phone. When he reached the limit for the number of words he can type in, he used Facebook instead, marking his writings as drafts or setting them on Private. Daily, he would add entries.

One day, he unconsciously posted his draft. His initial response was to delete it but later did not after going through the reactions and comments. One day it was him whose looking for inspiration; on another day he is the inspiration. Finally, a coin toss in his favor. The validation of his life struggles comes after a positive reaction.

Life isn’t all gloomy for Jervin for he has a mother whom he considers to be his support system. With a little encouragement and a sense of perseverance, he had become malleable in his mother's words. They both remained unfazed–facing struggles with hope.

It felt to him that everything that led into this moment had a purpose. May it be redirection in his future career or preparation for a bigger surprise in life, it is the desire to please God more than anything else that made him cope with his problems.

As the Bisaya people would say, “we still have a long way to go, but we have come a long way," a mantra Jervin holds dear that kept him to look back when it's not easy to go forward.

As Jervin hopes to continue his life journey, he bestowed wisdom he proves to be effective: “You only fail when you give up. As long as you know you are doing it for good and for your future, help will surely come along the way,".