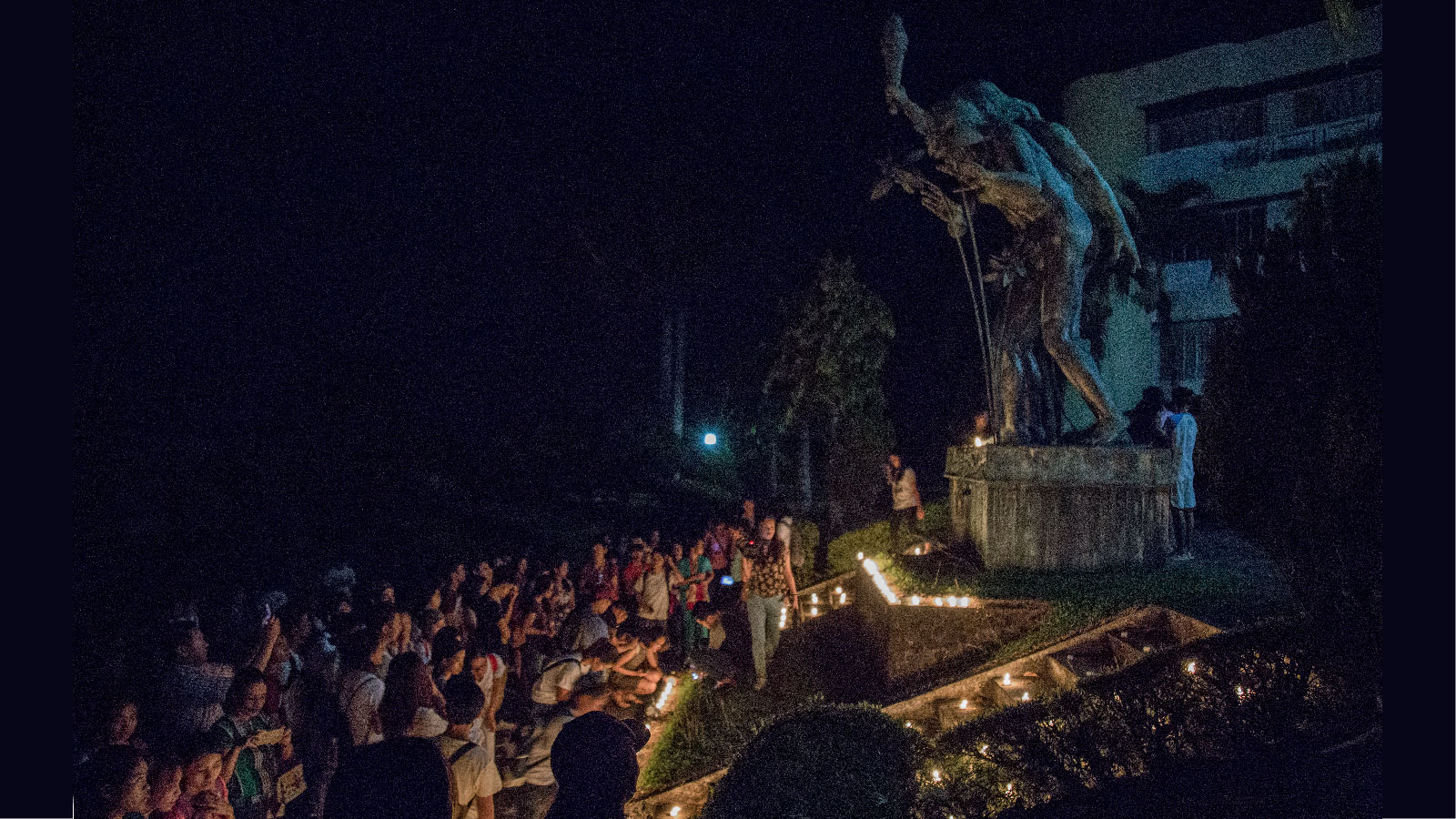 BAYBAY CITY, Leyte — VSU students gathered to light up candles around the Search for Truth monument to commemorate the onslaught of supertyphoon Yolanda three years ago, on Tuesday, November 8.

The Institute of Strategic Research & Development Studies (ISRDS) and a number of student organizations led the event, with over a hundred students attending the dusk ceremony at the university amphitheatre.

“Everybody was worried. Mahadlok jud ka kay you don’t know what people are thinking, people are desperate. When I went to Tacloban, it’s really different. Akong feeling kay naa ang mga kalag didto padung sa Tacloban. It was there, you could feel the pain and the suffering of people” Prof. Tabada said.

“Three years have passed and the pain remains that the road to full recovery and rehabilitation is still wanting,” Unlu-cay’s statement read.

“We offer these candles not just for the memory of those who left us, but also for those who are still suffering because of the typhoon's effects and of the institutions' shortcomings in responding to the needs of all Yolanda survivors,” he added.

“We hope that our Yolanda experience will be a wake up call for everyone to take climate change seriously. While our country in general cannot be blamed for worsening the global climate to what it is now, we are the ones who become the most vulnerable for the failure of the international community to finally ratify an acceptable climate pact.”

“As students we have a duty to be part of the ongoing discourse in climate change because our future and the future of the next generation highly depends on it”, read Unlu-cay’s message.

The University Supreme Student Council also took the chance to air its stand against the decision of the Supreme Court to rule in favor of President Duterte’s decision to allow the burial of former President Ferdinand Marcos in the Libingan ng mga Bayani.

“Allow me also to offer these candles as our protest to the recent decision of the Supreme Court to allow the burial of former President Ferdinand Marcos in the Libingan ng mga Bayani. Because of this, November 8 will not only be remembered for Yolanda but also for the tragedy of allowing a dictator to be honored as a hero. We mourn this day and we are one with the thousands of Martial Law victims. Let us continue to pray for this country as we face another challenge in our history”, Unlu-cay’s message read.

“It’s like we forgot the values that we adhere [to] and the commitment of people. Many of them died for us to have freedom. The freedom that you enjoy today is freedom brought by people who may have died during the Martial Law. To bury Ferdinand Marcos in the Libingan ng mga Bayani is something we really need to reflect on. What are the things that we as people truly value? What are the things that make us Filipinos? If we price freedom or democracy, what are we willing to pay so you enjoy the freedom that you enjoy today?” Tabada said.