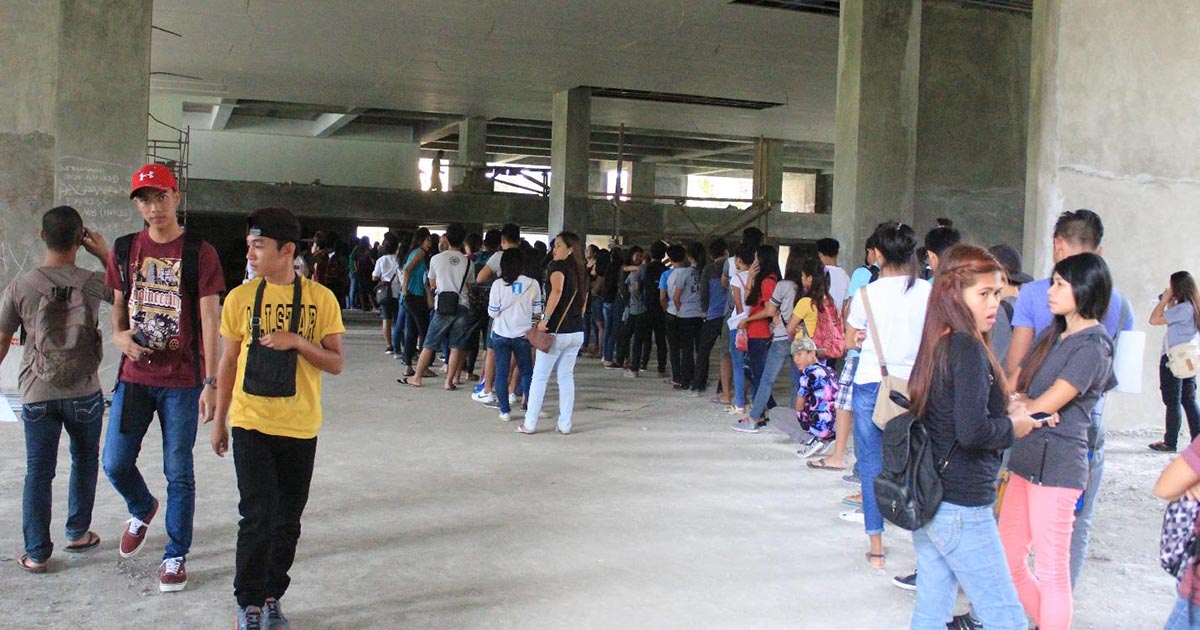 The enrollment week that started January 3, 2017, saw lines that were longer than the usual, owing to bottlenecks in the registration process, and students paying their accounts from last semester.

Many students had to deal with unpaid dues from the first semester before they could continue with their enrollment.

The long queues became a problem, compounded by the lack of crowd control and the disorganized giving of priority numbers. Students complained about the lack of cashiers assigned at the old accounts section, and few facilitators taking care of the assessment of fees. These caused bottlenecks in the process since only university administrative staff are authorized to assess and accept payments.

Enrollment queues at VSU are usually long and tedious, but this year was unusually so. The line for the payment of fees started at the IT building, crossing the street to the new library building, and even reached the Mahogany Men’s Hall.

Because of this, students couldn’t help but air their frustrations and disappointments concerning the state of the enrollment.

(The lines are not organized and the progress is very slow. The calling of priority numbers is not even clear.)

(I’ve been here for four days now, yet I’m still settling my old accounts. Their service is very slow – one person takes 30 minutes to make transactions.)

One student pointed out the lack of manpower as a big reason of the many delays. Jenefa Canoy, BSBio-4, said that removing the assessment of fees in the registration process was a right decision.

(The enrollment last semester was easier compared today. It was right that they now removed the assessment of fees, considering they lack manpower. There are many students who live far from here, and they are expecting to finish the enrollment in one day, since it is written in the registration schedule. And then this happened, we reached four days here.) 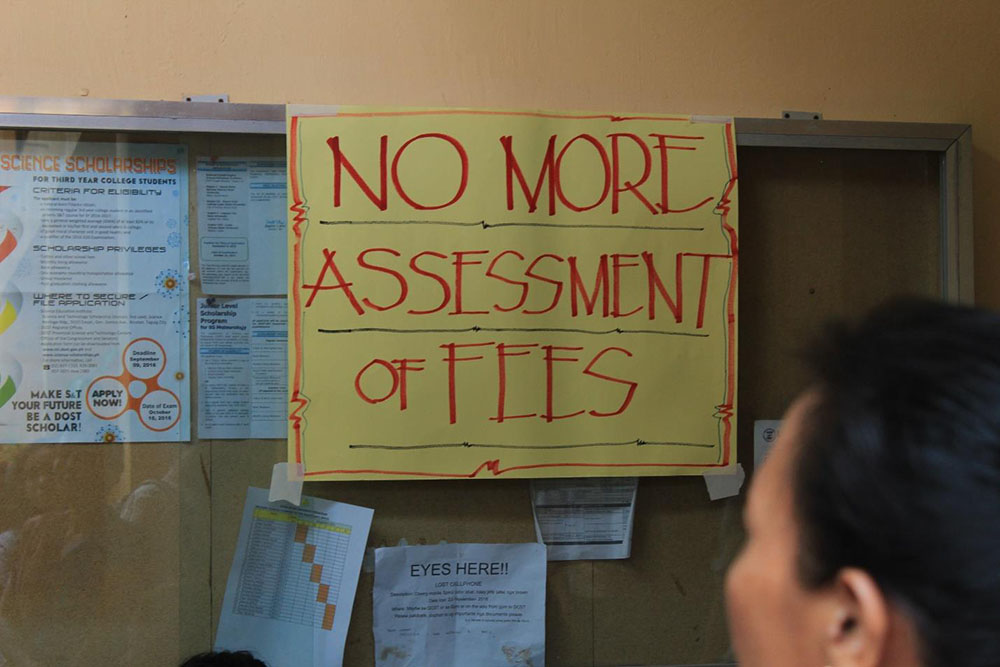 The assessment of fees was removed in the enrollment process to at least make the registration faster. Photo by Mark Pineda

(It’s my third day coming back yet I haven’t secured a priority number. They always run out of priority numbers and they call for cut-off early at 9AM. Until now, they are still on cut-off. Fortunately, the cashier signed our registration permit for us to finally move on to the next step.)

However, there were students who see this situation as also a fault in their part. A student, who requested to remain anonymous, said “Yung mistake rin naman nasa estudyante rin eh. Understandable yung iba na wala pa talagang pambayad last sem pero yung iba na tinamad lang magbayad, they’re the ones who made this enrollment this messy.”

(Students are also at fault here. It’s understandable for those who really have no money to pay for their fees last semester, but those students who were just lazy to pay, they are the ones who made this enrollment this messy.)

(Students must be responsible in following the rules. We’ve been lining up here since 7AM but then, they adjusted the lines because there were students who made their own lines. Now, we are here at the farther end. We’re hungry, and we’re having a hard time. Why is it like that?)

While students are voicing out many complaints, Mr. Norman Villas, UCC Computer Programmer, said that VSU is aware of this difficult situation. He explained why this is happening:

(The cashiers were surprised because only few students settled their accounts during the final exams. The students decided not to pay their fees for the enrollment beforehand. Now, many students have back accounts. The lack of manpower was because there were staff promoted and transferred to other offices.)

Mr. Eliezer Velasco, University Registrar, assured that they are now applying solutions to make the registration process easier for the students.

“We are now reinforcing additional staff to cope with the demand.”

However, Villas admitted how difficult it is to hire new workers.

(The problem here is that it’s not easy to add people who are qualified to work there. The cashier has to have an experience and besides, there is a hiring process. What we did was to borrow people from the accounting office and deployed them there. Their tasks in the accounting office are temporarily halted so that they can help with the enrollment.) 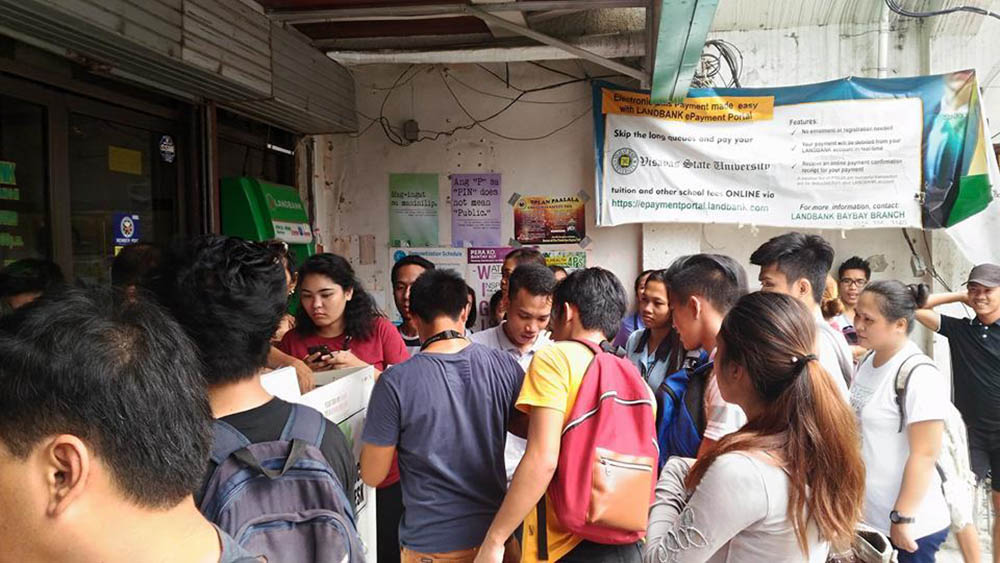 VSU students crowding the main door of Landbank of the Philippines, Baybay City branch, to pay for their account fees. Photo by Faith Sinogaya

In the fourth day of the enrollment, the students standing in queue at the VSU IT building become manageable. However, the Landbank of the Philippines, Baybay City branch, had to accommodate hundreds of students lining to pay their account fees.

(I asked if there is another way to pay for the old account fees and the cashier told me to go to Landbank. They gave us the VSU bank account, we asked for our official receipt then we proceeded to the validation.)

Students said that process of paying is faster in Landbank.

As of January 6, Friday, Marlon Dampios said that the lines and calling of priority numbers are already under controll. Dampios manages the ROTC students and guards who see to it that lines are properly followed.

Many students appeared surprised to have a remaining balance of 50 pesos under the student publication fee in their back accounts, which hampered the enrollment process even further. This was, however, already implemented during the past semester despite not being in the old assessment forms.

Mr. Celso Sacro, who was in charge of validation, revealed that the notice citing the addition of 50-pesos to the publication fee had reached DCST two months late. The assessments were already printed, and students who settled their accounts during the 1st semester were also surprised to find a fee that was not listed in their forms.

This 50-peso fee was the increase that was approved by the students during the plebiscite conducted at the last General Assembly, where Amaranth requested the increase of the publication fee from 50 pesos to 100 pesos, citing lowering student count and increase in operational costs.