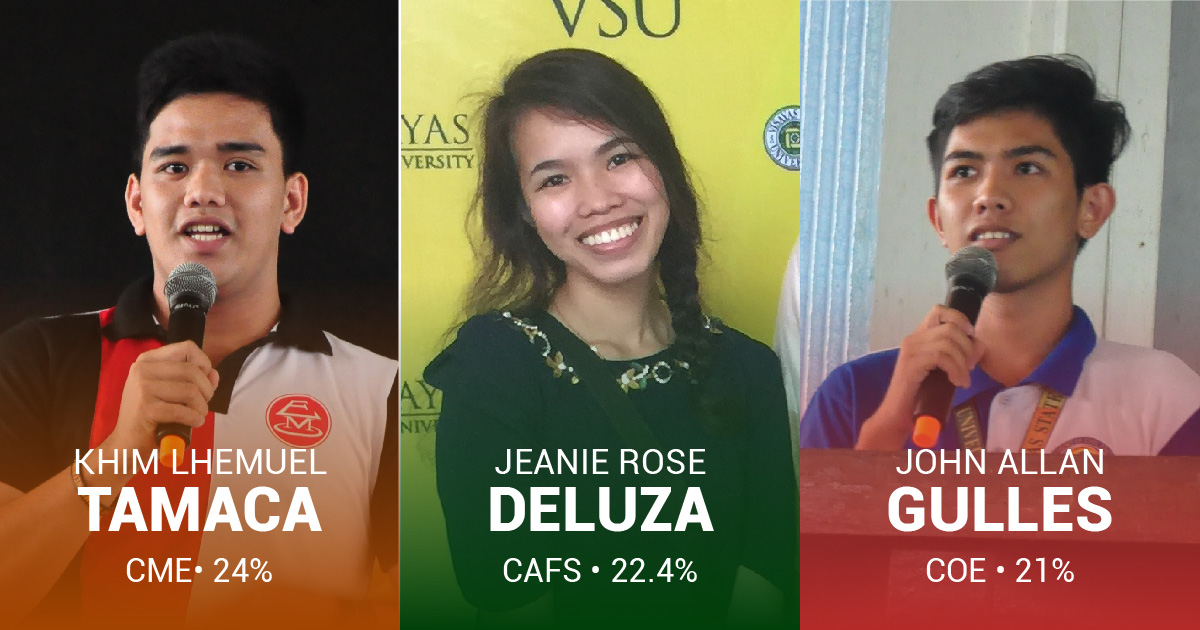 The incoming council presidents of these colleges emerged as the top choices in an Amaranth mock poll conducted during the USSC General Assembly on May 9, 2017, Tuesday, at the VSU Gymnatorium.

During the general assembly, the incoming presidents were asked to stand if they had clear intentions to run for USSC President. Three stood up: Deluza, Gulles, and John Gerard Abando of the College of Arts and Sciences.

But Gulles tried to downplay his “intention”, saying it does not mean a strong “determination” to run.

Tamaca told Amaranth he is not willing to run since he will go on his agribusiness OJT next school year. Abando, despite standing up first, only got 3.8% from the mock poll.

Among the frontrunners, only Deluza has signified a clear interest to run.

VSU students, however, do not get to choose its student regent. The presidents of the College SSCs vote for the USSC officers among themselves, parliamentary-style.

The Amaranth poll, however, tried to get the pulse of the VSU students. It asked, “If it were up to you, who would you vote for USSC President?”

The poll then lists down all the presidents-elect from each college and satellite campus of the VSU system.

Amaranth’s analysis of the mock poll shows that most colleges supported their own president-elect. Only the College of Nursing and College of Arts and Sciences didn’t give a majority vote to their new presidents.

The presidents-elect are set to meet soon to carry out the USSC elections. Outgoing USSC President Mark Michael Unlu-cay told Amaranth that this will be during the TIME Congress, an annual leadership congress that will prep student leaders before the school year starts.