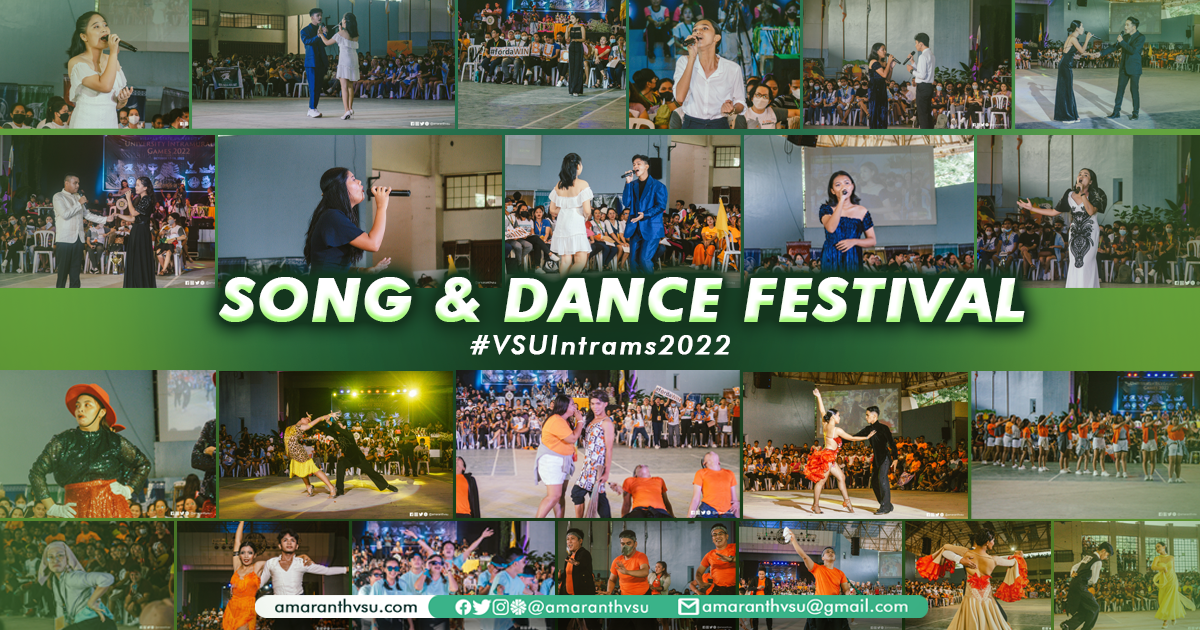 The song festival aimed to highlight the vocal talents of the participants. The vocal solo and duet competitions were coordinated by Prof. Joselle R. Cayetano. Each contestant was given the freedom to choose their own Original Pinoy Music (OPM) song. Mary Grace Gara from Soaring Phoenix’s won the vocal solo category with her rendition of Freddie Aguilar’s hit song, Anak. For the vocal duets, Growling Manticore’s representatives, Angel Roch Abocejo and Joshua Dayandayan stood out with their interpretation of Makita Kang Muli by Sugarfree.

The diversity of genres for dance led to the different categories which include dancesport, hip-hop, and the faculty Tiktok dance competition. This was spearheaded by Mr. Dennis Joel Cerna and Mr. Jovel Aberilla. The two main categories of the dancesport competition are the Modern Standard Discipline and the Latin-American Discipline. Modern Standard Discipline is divided into three categories: a derby of slow waltz, individual tango, and the final derby of quickstep. Comparably, the Latin-American Discipline was composed of the derby of chachacha, an individual rumba, and the final derby of jive.

While all the performers had their own standout moments and danced their hearts out, Fierce Hydras won the faculty Tiktok dance competition. Soaring Phoenix representatives Kaye Besas and Vincent Ligad stole the spotlight for Modern Standard Discipline. Hans Herbert Batican and Chayeb Mary Cambronero of Gallant Griffin successfully dominated the dancefloor in the Latin-American Discipline. On top of that, the performance and synchronization of the Soaring Phoenix dance team made it to the top in the Hip Hop category. Their performance ended the song and dance festival with a bang.

There were no dull moments as every participant from each category poured all the weeks of practice leading up to the event into their performance. The Song and Dance festival was one of the highlights of the Intramurals since it brought joy and excitement to the whole event. It gave an equal opportunity to students who excel in performing arts by showcasing their talents.

Albeit considered arts, the skills and rigorous training needed for singing and dancing are no less than traditional sports. The factors that made the contestant become a true athlete is the spirit of teamwork, their competitive nature, and the sacrifices they offer to master their craft.

The VSU intramurals encourage healthy competition amongst the different colleges, the student body, and the athletes. The finale of the intramurals, song, and dance festival embodies what it means to live in the moment and grant memorable experiences.