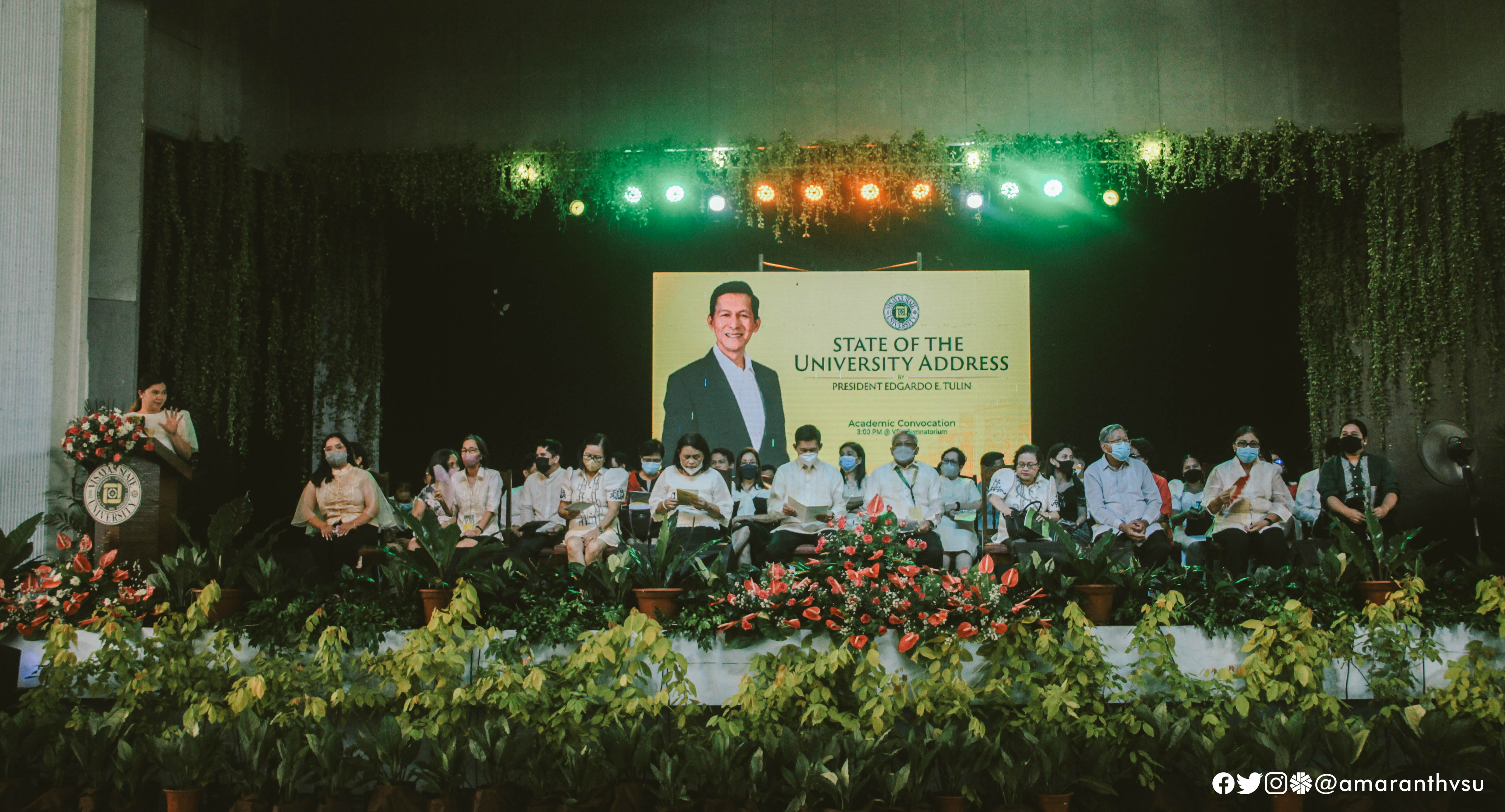 President Edgardo E. Tulin outlined the Visayas State University's (VSU) achievements despite challenges posed by the pandemic as well as his future plans for the school during his State of the University Address (SUA) held at the VSU Gymnatorium Monday, November 21.

Labeling his speech, "Padayon sa Paglambo", Pres. Tulin described VSU's journey in the past two years and his aspirations for the institution during his address to illustrate its standing as “one of the leading universities for science, technology, and environmental conservation in the Philippines.”

As he opened his Fourth State of the University Address, Dr. Tulin expressed his gratitude for the successful return of in-person classes of five component campuses of the VSU system. VSU was among the universities in the Philippines that implemented face-to-face classes in full capacity since the start of the Academic Year 2022-2023.

Due to the threat of COVID-19, a handful of policies and regulations have been observed by VSU over the past two years, including the roll out of vaccination monitoring program that encouraged the faculty members and administrative staff alike, as well as the students to be inoculated prior to the start of the face-to-face classes.

Pres. Tulin also emphasized the efforts of the university in passing the assessment visits of Commission on Higher Education (CHED), acquiring a high score as they have prepared in installing hand washing areas and signages for effective monitoring of minimum health protocols.

In addition, the house panel already approved the house bill that offers a college of medicine in VSU and the university is now preparing its blueprint for its establishment.

Staying true to the university’s “going global” mission, Pres. Tulin reported several of the university’s achievements in terms of internationalization in the past years. Some notable accomplishments include VSU’s 71 successful agreements and linkages, five of which are international engagements with universities and research institutes from different countries, which produced professor exchange programs and collaborative research activities.

These efforts ultimately led to VSU breaking into national accreditations and global rankings. The university is reported to be the first Level IV AACCUP-accredited institution in Visayas and Mindanao. Moreover, VSU ranked eighth among 366 institutions in the Webometrics Ranking of World Universities and also gained a “Reporter” status in the prestigious 2023 World University Rankings of Times Higher Education (THE).

Looking back to the President’s 2019 University Address, the mentioned accomplishments are aligned with the institution’s vision of a VSU 4.0, focusing on building VSU as a global university.

The administration installed 200 solar-powered lamp posts in the Upper and Lower Campus which was one of the priorities in the 2020 University Address. The success of this project contributed to the reduction of the university’s increasing power rates and also to campus safety and security.

With increasing enrollment rates every year, the university also plans to act on the lack of facilities by constructing a new classroom complex beside the Old Library that can cater to general elective courses. Restoration of the Warner Apartment is also expected in the coming months to house qualified faculty and staff.

Furthermore, Pres. Tulin will also inaugurate the newly constructed 15-million-peso Centennial Gates securing the perimeters of the VSU Main Campus. It will be fully operational in time for the Christmas Lighting event next week.

Another major scheme of the university is the Futures Thinking Project which aims to make VSU the leading institution to mainstream sweet potato and jackfruit research, production, and commercialization in the Philippines in order to improve food security in Eastern Visayas.

This project is one of the university’s attempts in pushing itself as “a National Green University in charge of sustainable and inclusive agricultural practices that carry green innovation strategies that will protect the planet and build resilient communities that are ready for the many challenges of the 21st century.”

One of the priorities mentioned in the past state of university address of Pres. Tulin was the waste disposal system through implementing a no-single use plastic policy. The administration was able to implement this policy in the late 2019 to early 2020 before the suspension of classes due to COVID-19 pandemic. The said memorandum was renewed through the OP Memo Circular #108, Series of 2022, or the implementation of Clean-As-You-Go (CLAYGO) Act. However, various comments came in sight when the policy was not implemented anymore in the campus, especially in the market where the use of plastics are now allowed in stores and food courts.

With these attainments, Pres. Tulin still affirms that VSU will continue to grow as one of the leading “bastions of knowledge exchange and scientific breakthroughs” in the country and in Southeast Asia.