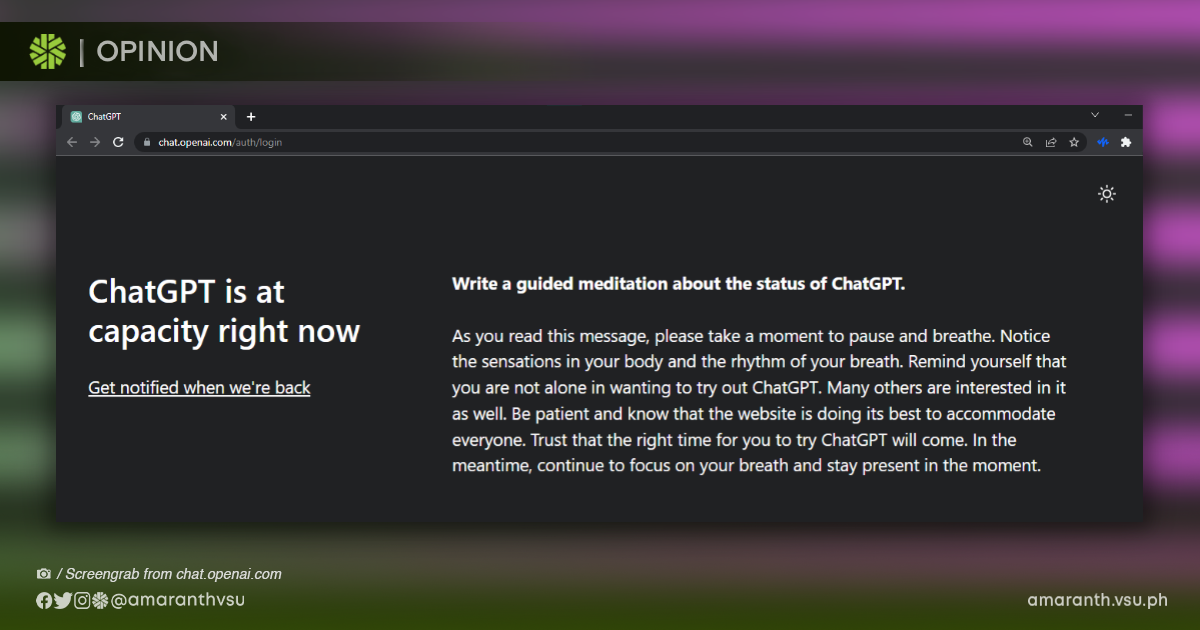 The 21st century has long been imagined as a futuristic utopia in which flying cars would be the norm. Unfortunately, that vision has yet to come to fruition. While we may not have achieved the technological advancement we thought we would have by now, some previously unimaginable innovations have become a reality. The future is a fickle thing, full of surprises and disappointments.

Artificial intelligence has already been realized in our timeline; quite a remarkable feat for humans. Who would have thought that the first paragraph of this essay is perfectly paraphrased by artificially intelligent software? We have indeed come a long way from being a species of hunter-gatherers.

Thanks to the power of Twitter and TikTok, a website called ChatGPT (one of the few projects by OpenAI, the author of the infamous AI: DALL-E 2) has been making rounds. In the first few days of its launch on the world wide web, its users have reached over one million people, a statistic unrivaled by social media giants in their humble beginnings.

Its interface is simple yet its results are incredible. Similar to how the popular app, Messenger works, you can instruct the AI (instead of a real person) in the chatbox “to make a 500-word essay on the privilege of the rich and powerful to escape from the wrath of the law”, and it will be done. The AI can create it for you faster than you can prepare yourself a cup of coffee that you would likely pair when you are on a deadline. And do not expect mediocrity, its technology is too far advanced to stoop down to the level of grammatical errors. If you can create a prompt for it, the AI will be able to make it— of course with limitations.

In general, it is capable of doing your bidding, such as writing an essay.

Remarkable will definitely be a first impression of this technology. “Why would I bother creating an essay when I can prompt an AI to make it for me in less than 5 minutes?”, is a thought that will be normalized in the minds of students who are not as inclined in writing.

This, as a result, leaves us with a threat to our community, in our case, as a state university heavily invested in research— the academia.

But, a Princeton student has already found a way to counter this threat. Edward Tian wrote GPTzero in light of the craze of ChatGPT. A professor can simply copy and paste an essay and it can detect whether the output has been generated by an AI or a human. Thankfully, the ethical standards of the academic community may be preserved– at least for now.

However, artificial intelligence like ChatGPT and more is here to stay. It would be no surprise if more amazing technology will pop out of nowhere again anytime soon that members of the academic community will deem useful and threatening at the same time.

Obviously, it should not be generally antagonized, as after all, we long for progress through research. If it can carry a large load in our task making it easier and more simple, why not? But the nature of AI, similar to this software, may be abused to the extent of violating our ethical standards. It may be utilized for processing data or information that should be conducted by humans. Essay writing or any type of writing (even research) that should be done by us may be instead prompted to the AI. There would be no touch of human ingenuity and creativity in the prose and poems that are about to be made. The results would be similar to that of stale and hard bread: monotonous without a hint of critical thinking. Relying heavily upon this technology may hinder us from correcting the errors that it will create; as long as it gets the job done, we will deem its output as passable. AI will breed a mentality of quantity over quality in the pursuit of progress through research and development.

Of course, the initial reaction to this would be to deprive the information on the existence of this technology, especially students, as it may be used to escape the menial tasks of creating essays or other expected outputs. But hindering the conversation around it will only tolerate its usage, creating an open secret. So it is best talked about in order to find solutions to this issue to find ways to mitigate its impact (like GPTzero) to our society as we head for further advancements. After all, we are now living in an ever-changing society spearheaded by technology.